When choosing a cat, a Bengal makes a charming pet. Friendly and playful, they will keep their owner entertained, and have a similar appearance to leopards, although they have a greater variety of colors and patterns. Just like their larger, spotter cousins, they are considered excellent hunters and strategists.

The International Cat Association’s (TICA) standards of the breed allow three basic colors – brown, silver, and snow. Three other colors – charcoal, blue, and black/melanistic are not yet recognized.
There are two standard patterns: spotted and marbled. There is also a variant called “sparbled” which combines both a marbled pattern and spotty rosettes.
Listed below is full classification of colors and patterns of Bengal cats to make your choice easier.

First, let’s get acquainted with the recognized colors of Bengal cats. Each color – brown, silver, or snow – is beautiful in its own way and has a clear description. Bengal cats of these colors are closest to their wild counterparts, the leopard, or snow leopard. 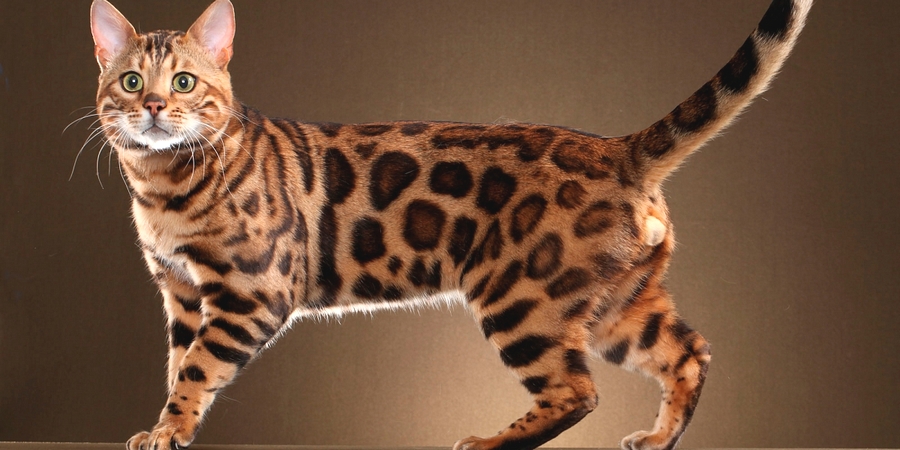 One of the most usual colors of Bengal cats is brown. And the most spectacular is “rosettes on gold”. Brown Bengals have green or golden eyes. The brown coat has many variations, from a cool light beige hue to a warm red, and even brick. The spotted belly is usually much paler than their back. Their paw pads and tail tip, on the other hand, are always brown. 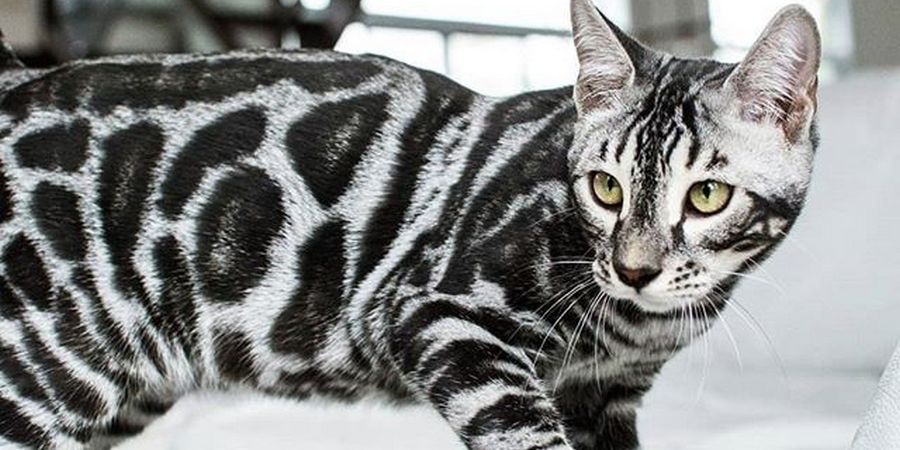 If you see a Bengal cat with a bright dark pattern on an almost white background, you are looking at a silver variety. To confirm this, check the silver coloring excludes warm tones. The tip of the tail, paw pads, and pattern are always black. Distinctive features of the Silver Bengal are green or gold eyes and a brick-colored nose. The inside of the body and legs are, usually, white. The undercoat is most often silver-white or white.

This color name is given because these Bengals resemble a miniature snow leopard. Within this breed, snow colors are divided into three shades: Seal Lynx, Seal Mink and Seal Sepia. All Snow Bengals are very beautiful in their own way, while differing in their genotype. The Snow Bengal cat was artificially bred, so one litter of Snow Bengals may contain kittens of a different color. The hue of the coat varies from ivory to cream color. 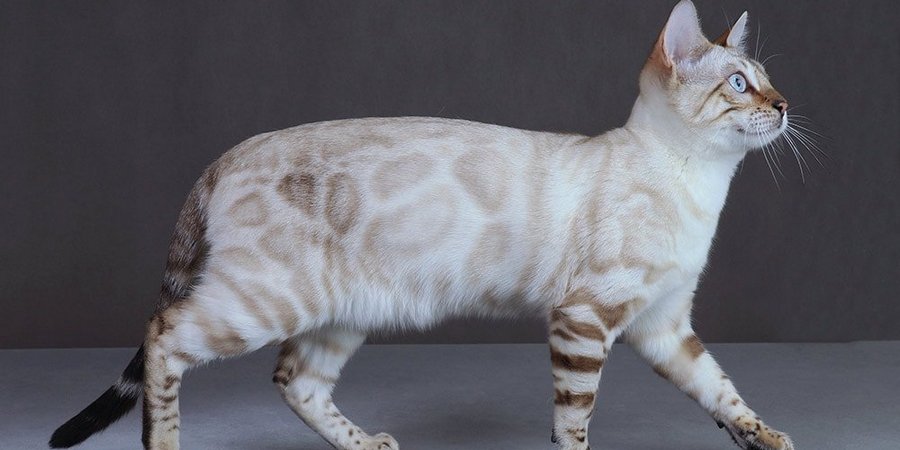 These beauties were created by crossing Bengal breeds with Siamese cats. This is the lightest variety of snow Bengals. The difference between the background and the pattern is almost imperceptible, however, the spots are quite pronounced. This breed of cat has blue eyes, which may take on a ruby hue when flashed. Seal Lynx kittens are born almost white and remain so for a long time, with only a faint appearance of spots after 75 days. However, the pattern is quite noticeable after a year. The Seal Lynx has a brown tip and nose, as well as paw pads and eye bands.

This type of snow Bengal cats come from a cross of Bengal, Siamese and Burmese breeds. At birth, kittens already have a pattern on their fur. The basic coat is colored cream and has brown or dark orange markings on it, and is between the Seal Lynx and Seal Sepia in how deep the color is. 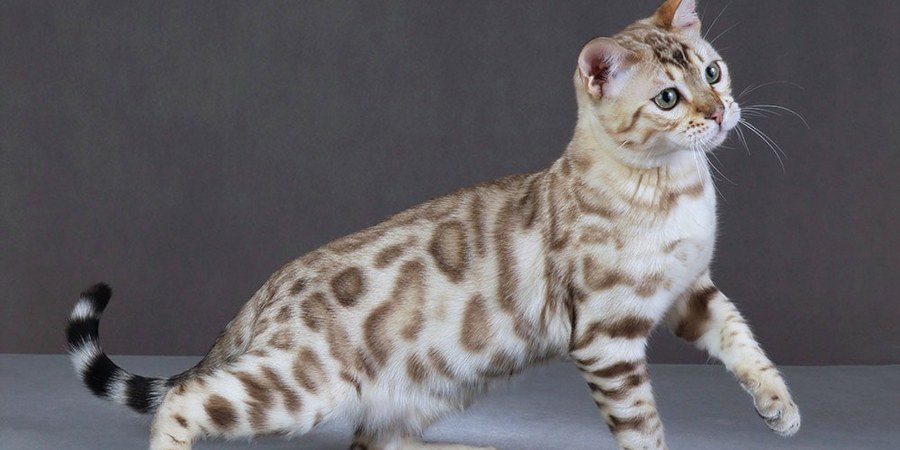 This type of cat came from crossing Bengal and Burmese cats. The Sepia is considered the darkest representatives among the Snow Bengals. Their coats are not quite white, rather creamy. The spots are often bright and cinnamon in color. In those Sepias that are solidly colored, the difference between the body and the spots is indistinguishable. Just like lynxes, the tip of the tail and other parts of the body will have a brown hue.

Let’s look at the colors of Bengals which, although they are not yet included in the breed standard, are no less beautiful and exotic. There are three such colors, and all of them have their individual features: Charcoal, Blue and Black (Melanistic). 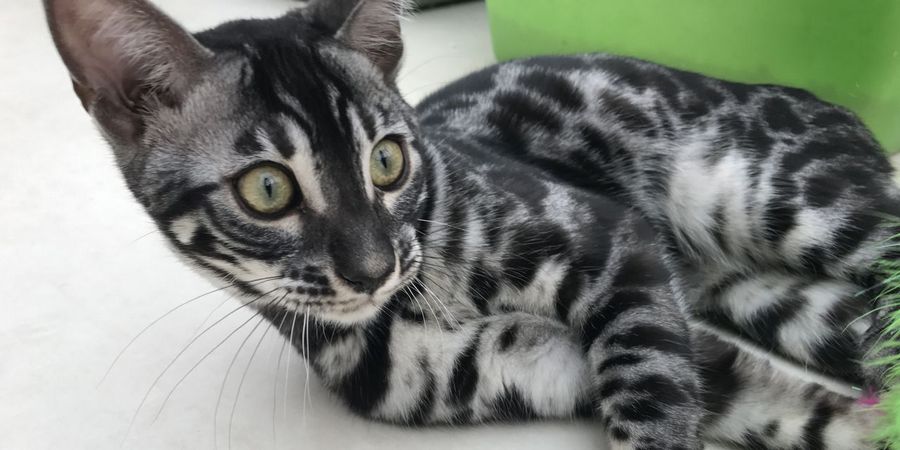 This is a very rare coloring, which is featured by a cooler light tone of the main background color. But the main feature is the color of the spots or pattern on the body and muzzle, which is a rich charcoal-black color. The eyes are often surrounded by a band of light color, which gives the impression that the cat is wearing glasses. The charcoal color is inherited regardless of parents’ colors, and can be shown in every color class: brown, silver, snow (Lynx Charcoal, Mink Charcoal, Sepia Charcoal) and even blue. Although the charcoal color is not an officially recognized standard, although it is very popular among Bengal owners. 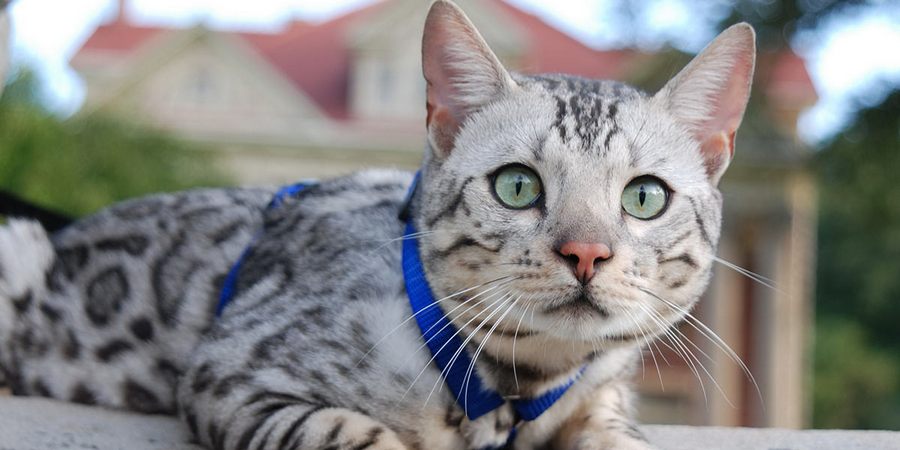 Blue Bengal is a rare non-recognized color. The basic background is gray blue, with a slight peach hue noticeable on the belly and chest. The dark, usually gray, pattern on the coat makes the Blue Bengal a great-looking cat. 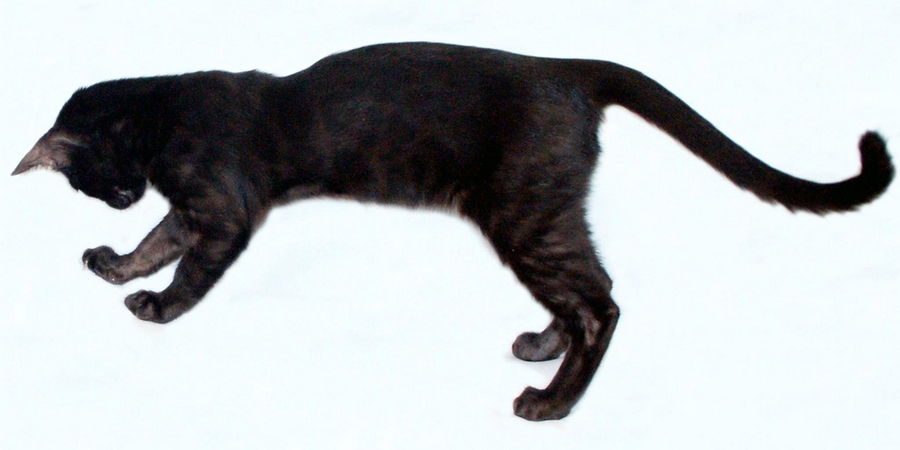 This is the rarest color of the Bengals and is not recognized by TICA. At birth, the kittens appear without spots or patterns, which appear later. Often the Melanistic has a black tint. Bengals with this color are very similar to black panthers: they have a dark pattern on a dark background. The pattern on the coat is often called ghostly, as it is barely visible and is only visible in daylight.

With a complete picture of all the existing colors of Bengals, we can look at patterns, the appearance feature for which Bengals are so prized. But before we classify the patterns, let’s talk about fuzzing, as this will prepare future Bengal owners for the right expectations.

What is fuzzing of Bengal kittens

There is no doubt that all colors of the Bengal breed are spectacular, except that full-color Bengals do not immediately achieve full glory. Typically, kittens are taken from the cattery at the age of 3-4 months. But if a future owner expects a spotted kitten with a shiny coat, they will be disappointed.

Instead of a miniature leopard they will receive a kitten with a thin, fluffy coat with some indecipherable pattern on it; just like an ordinary yard cat. The breeder starts to explain something about fuzzing, but a person who is not familiar with Bengal breeds may have doubts – why pay such a huge amount of money? However, the fluffy coat and fuzzy pattern is a normal phenomenon for kittens, and it is called fuzzing. What is fuzzing in Bengals, and how does it show up? 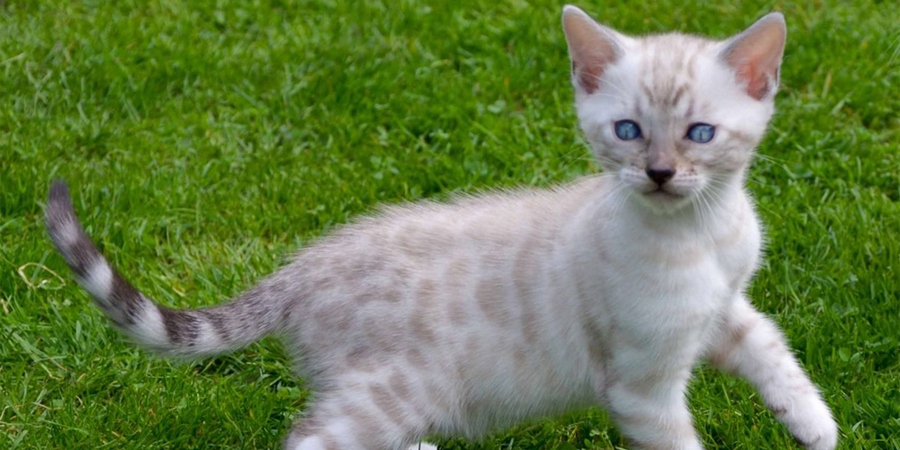 Fuzzing is nothing more than a type of camouflage that hides a kitten’s natural pattern, and inherited by Bengals from their wild ancestors. It usually begins at the age of one month. Some Bengal babies have more lightening, others less, but at this stage it is difficult to call the baby a leopard, it is more like a hedgehog! As the kitten gets older, the coat becomes more beautiful and spotted or marbled. By about 5 months of age, its coat gradually clears, and at 7-8 months the kitten will be the handsome Bengal with a bright, rich pattern the owners dreamed of.

The lighter the kitten’s origin and the shorter his coat, the less susceptible he is to tarnish – the appearance of other colors in its coat. As the kitten grows up, the tone of the coat may become more saturated, but the contrast of the pattern remains. Likewise, a Bengal cat with a thicker and longer coat and a lighter background will have a more festive and catchy color later on. “Camouflage” in such cases is very strong. Sometimes kittens, most often small, marbled Bengals, are born with fading, which goes away after a couple of weeks, but then appears again and disappears finally at the age of 5-7 months.

Once the cat has reached a certain age, they will have a distinct pattern. Generally, patterns are divided into three types: spotted, marbled and sparbled.

The spotted pattern of Bengal cats consists of small or medium sized spots or rosettes of certain colors evenly distributed throughout the body. Bengal rosettes are two-color spots that contrast with the main background. The color of the spots must meet the standards of each color. The spotted coat that makes these cats look like leopards is the most common in Bengals. The spotted pattern on the coat of a Bengal cat is represented by seven varieties, which differ from each other and have the following characteristics. 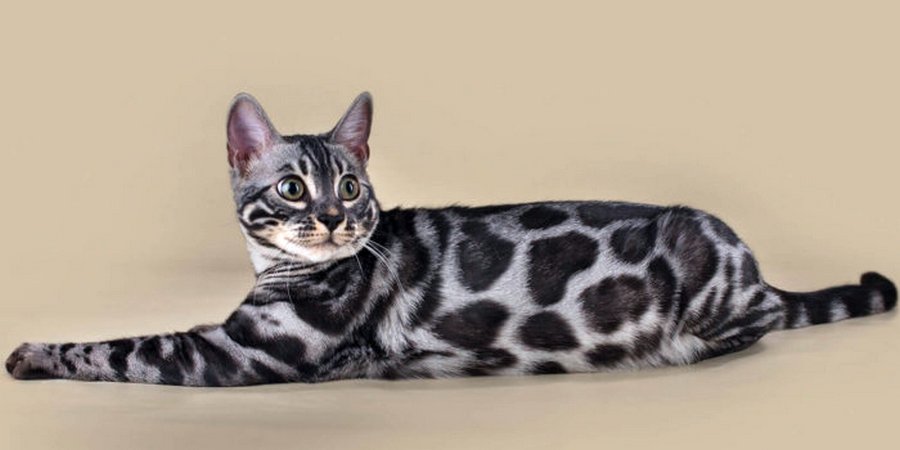 Monochrome spots are similar to the drops of paint on a contrasting background. This pattern makes the Bengal look like such a magnificent wild cat as the Cheetah or Egyptian Mau. 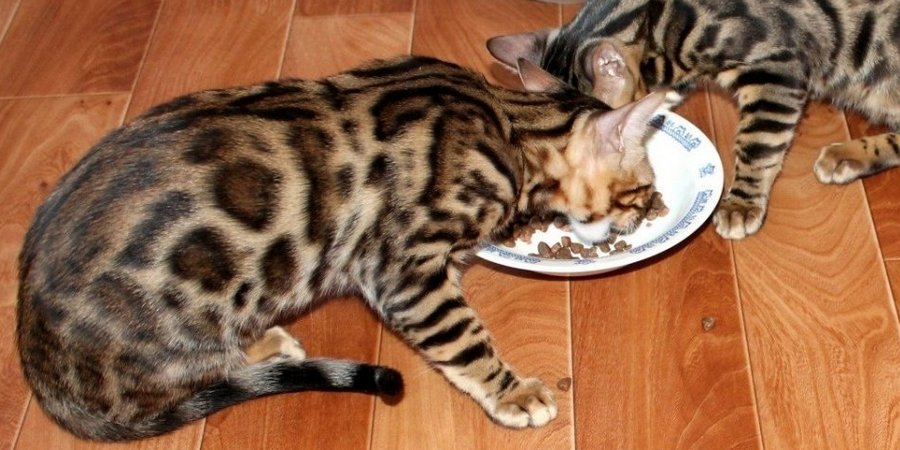 Theese Rosettes can be either solid or multi-colored, aligned horizontally. They get their name from the triangular shape resembling an arrowhead. The “tip” faces the back. 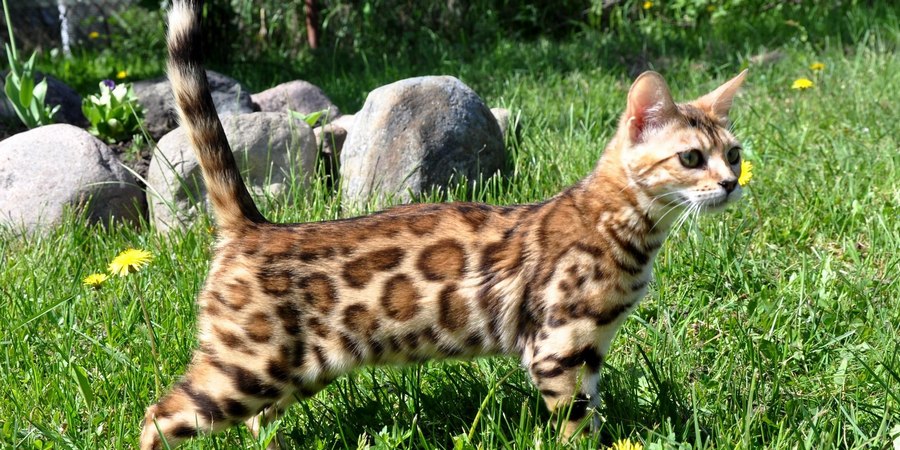 Donut Rosettes make the Bengal look like a jaguar. Such spots are much darker than the background, looking two-tone: almost black edging and a lighter middle. 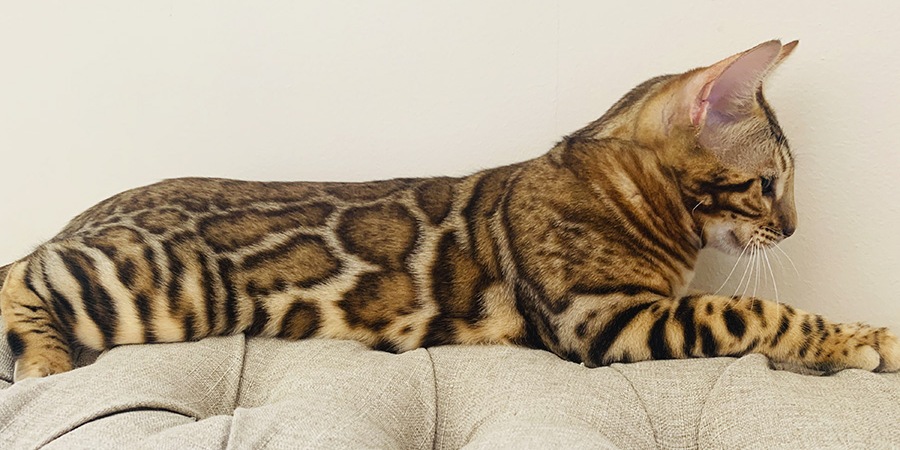 These are like shaded spots, circles that open on one side, resembling the coat of a leopard. The rosette is fringed with small spots that do not close into a continuous circle. 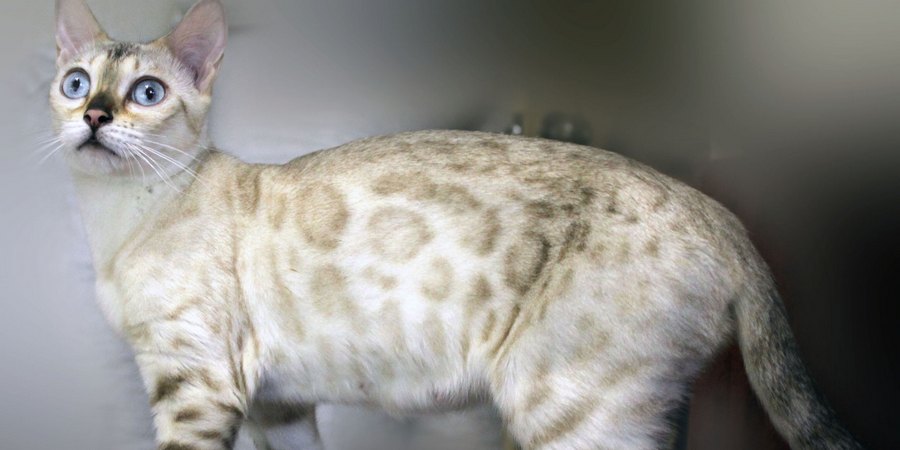 The smoky rosettes resemble puzzles, as if scattered in the coat at small intervals. This “meshiness” makes the Bengal look like a smoky leopard. 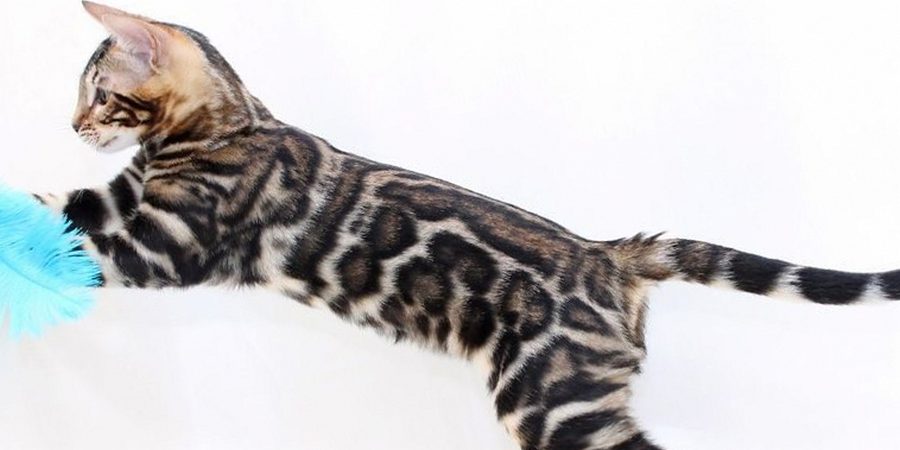 This will feature donut rosettes that are horizontally connected to each other, running parallel to the cat’s spine in both directions. The pattern makes the Bengal look like an ocelot. 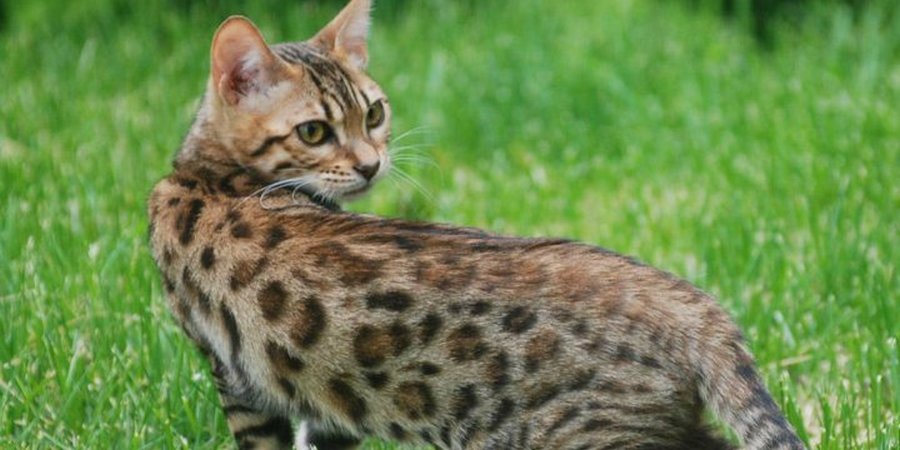 The variety of spotted patterns may be a bit complicated at a first glance. Every pattern is beautiful in its own way. In addition to spots, Bengals are allowed to be colored in a marbled pattern. 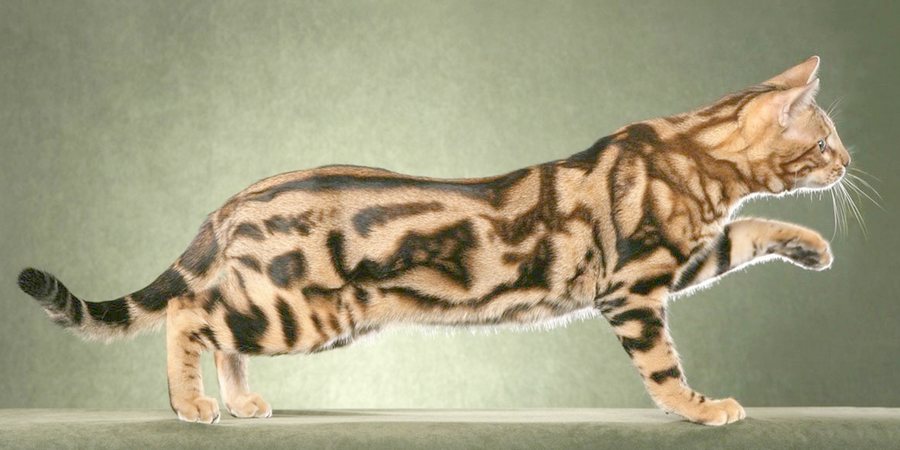 A marbled pattern on the coat in Bengal cats is a stripe of certain colors arranged on the main background in a certain order. This pattern makes the coat always unique. The marble pattern in Bengals is divided into four types:

Marbled Bengals are varied and look stunning. The individuality of the marble pattern makes each kitten unique. These beauties are eye-catching and admired. 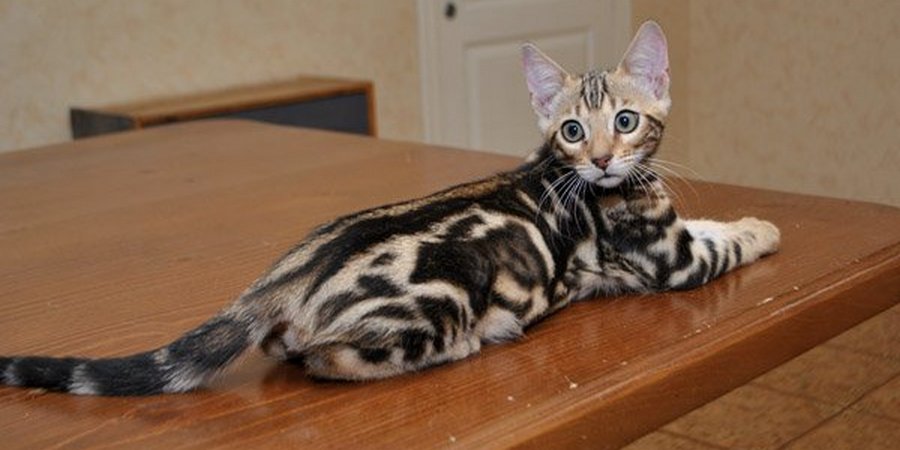 There is also such a variation of the Bengal cat pattern as Sparbled, which is a combination of both marbled pattern and rosettes spots. “Sparbling” is not actually an official coloration, and the breeder’s dictionary uses it to describe Bengals that have both rosettes and marbled markings.

Thus, the colors and patterns in Bengal cats are diverse and clearly classified. It is especially important to keep this in mind if you plan to have your Bengal participate in cat shows. If you decide to buy a Bengal kitten of a certain color or coloring, check its availability at % Bengal cattery near you %. If color is not important to you, you can visit a cattery and choose an adorable %Bengal kitten by temperament and personality % that will suit you and become a member of your family for a long time.

Are Bengals Cats good with other pets

The life expectancy of Bengal cats